← Thursday Nights and Super Heroes
Going to Try to be Quick, But We All Know How That Goes… →

I haven’t mentioned here, but a few weeks ago, near the beginning of March, Mom had to go back to the hospital with a mild case of pneumonia. It took a couple of weeks for her to get over that, as well as the other infections she developed while there. whenever she’s at the hospital for more than a couple of days, she ends up sitting and lying around so much she can’t stand up and needs physical therapy. So, she’s been out of the house for a couple of weeks now. That means I can work more, as I’m not caring for her every other day. So lately I’ve had a couple of weeks in which I’ve worked three or four of the weekdays. That’s great for my pocketbook, but horrible for getting anything done after work. That means I’ve just been kicking back after work and not motivated to accomplish anything meaningful to me. But I have accomplished a little.

One of the few things I’ve done is some work with my Dragon Age character. After the last post, we did character creation. I was afraid my GM might not want me to follow a certain path (a specialization that uses others’ pain to empower the character), as it’s pretty dark. He was cool with it though, and we got on our way.

My character is an escaped elven slave, and it’s interesting to play a character who wants to keep a low profile. It’s really coloring my decisions as the character moves through the world. For example, there was a weapon throwing contest, which the character would be pretty good at, but I decided he wouldn’t want to draw the attention of those who might turn him into a bounty hunter and return him to slavery. It’s very different for me, as I usually end up with my characters right up front, even if I don’t build them to be there. I look forward to seeing where the character goes in the course of the game.

I’m also building a mini for him. At first, I bought a couple of the new unpainted plastic Elven Ranger minis WizKids is producing for D&D, but after purchasing them, I realized they are Drizzt. I could paint them as high elves or whatever, but the fur mantle on his cloak is simply too damned recognizable. Instead, I’ll use a WHFB Dark Elf Corsair with two blades. I think he’ll have a good, dynamic pose that will be fun to paint.

My Superhero Rebuild project hasn’t been a big focus either, although I had some breakthroughs. I cleaned out the waterlogged box of game books and found some of my old Street Fighter stuff (the books were all destroyed). In there, I’d actually included histories on Agent Omega/Vindicator/ShadowWalker and Dr. Power. While I don’t have all their powers, etc., I do have the important things: their histories and some other details, like Dr. Power’s secret identity.

I’ve pretty much rewritten AO/V/SW’s history, as it was a bit dated and I wanted to make the timeline work better for 20 years later. I’m still not sure what happened between the last of the Champions games and the present, but I moved that character forward about 20 years in about 15 minutes.

Still not sure what to do with his missing years and travels to alien dimensions. My first thought had been to do a Planetary Romance/Sword and Planet (John Carter) sort of thing. However, that doesn’t necessarily move the character in a direction I like. If I don’t do that, I’m not sure what to do with him. I’ve also become interested in proprioception and situational awareness as superpowers. I think he will continue to be a gear-based character. That just seems to make sense.

This weekend at the local Bookwyrm gaming convention (had about 100 people at the con at the same time I was) I got to play a game called Phoenix: Dawn Command. It’s created by Keith Baker, the guy who created the card game Gloom and the D&D setting Eberron. I had a fantastic time with it, although it was a difficult location, and I’m sure the other players didn’t see my enthusiasm throughout most of the game. We were in the Story Room of a library, and the shape of the room caused the noise of other tables to drown out some of the players’ voices, especially the DM’s. And I ended up with another healer/social character, which I only realized later. I’m getting rather tired of that combination.

However, the game play was very entertaining. The idea is that your characters are reincarnated heroes of some time past. In fact, I first heard about it at the same time I got the idea for the Reincarnated setting I’ve been working on. P:DC was one of the inspirations for the setting, alongside Age of Sigmar.

These Phoenixes are brought into schools (classes) which determine their abilities. Those schools are very much a niche protection system, as only one player can choose a particular class. Each school is also based on the character’s first life, and death. We used pregens, so I saw none of the character creation material. The book and box are pretty bland as far as shelf appeal, but the real art treat is the cards used for challenge resolution. They are Tarot card sized and include some very stylized art that enhances the feel of the setting, a medieval world that is slowly being overrun by a group of evils collectively known as the Dread.

Challenge resolution is handled by placing cards from your hand out to try to achieve a total that is compared to a chart, which was included on the pregen sheet. There are three suits, each associated to a typical game ability: Strength, Grace, and Intellect. Grace is both physical grace and internal grace, as it is used for social challenges as well as physical. As the characters have a personalized deck with cards that favor their abilities, it is rare that a character can’t get a relatively decent spread of cards. As well, each character can always use his favored suit as a different suit if needed.

So, the game has some level of tactical/strategic play alongside a very story driven setting. As well, in an encounter, there is a card called the Torch. The Torch acts as the initiative system, with the players literally “passing the Torch” to the next player in line, which is determined by the player ending his turn at that moment. Enemies have a Speed stat, which determines how many players go between their actions. So for example, the dreadknights we faced always had a speed of 2, which meant two of us players would go, then the dreadknight, then two more of us, then the dreadknight again.

As well, the Torch lists a number of elements that are part of the encounter. These elements function like scene aspects in Fate, but each can only be used once. Having this list in front of you or another player is a good reminder they exist. It really helped us actually use those “aspects.” My character used one, and I came up with an effect that helped create a fun story. There was a listing for “Discarded Chains” on the Torch. I decided my cleric character walked by the chains on the way to a villain, picked up a chain, charged it with magical energy and flailed the villain with it. This made for a fun story and brought smiles to everyone’s faces.

At some point, I may pick up the game. I think the kids could play it and have a lot of fun, and I think the rest of the people I play with would be entertained by it as well. However, the book is heavy, there are a lot of cards, all in a very well constructed box, so the game is a little spendy for an indie game ($65 compared to the usual $20), so it may be a while before I pick it up. But it would be a worthy addition to any indie player’s game library.

Something I’ve been stumbling on for the Reincarnated setting I’ve been working on is the map. One thing I’ve wanted to do with it is have my players build the individual nation-states for the region of the fallen empire we would be playing in. I’ve been fascinated by the map below since I found it, and I’ve wanted to somehow incorporate something like this into my map. 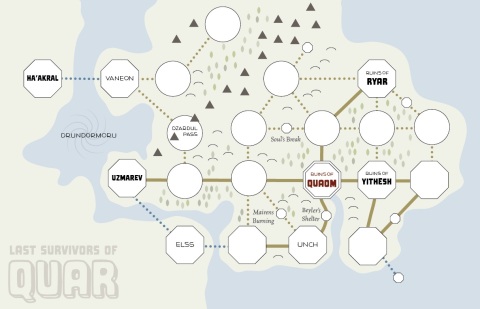 Obviously, each octagon or circle is an encounter location, which is what attracted me to the map. This map is a campaign flowchart, essentially. I find that a brilliant idea, that it is laid out so plainly to that end.

But in thinking about this map, and our discussions after my Thursday night game, I realized that what I think I really need for my map is a variation of a Western Marches campaign. We talked about doing a Western Marches style game (a setting idea by game designer Ben Robbins, creator of Microscope, Kingdom, and the upcoming Follow), which consists of a safe and boring base for the players, while they make excursions to the West of the base to assault ancient ruins and monsters, which absolutely do not exist anywhere to the East. In imitation of Moorcock’s Corum, which I’ve mentioned is also an inspiration for the setting, I plan on putting the safe zone one an island from which the players can jump off to attack the invader gods and their followers. I need to think a little more about how to do this, and I think flowcharting the setting a little bit more might be in order.

Finally, I bought and started reading Economix, in an effort to educate myself on, well, Economics. I’d stumbled across this site and book a few weeks ago, and something sparked me to really dig into the subject (mainly my brain getting hooked on it after driving by yet another strip mall going up in town). I can’t recommend this book enough, and I’m only 58 pages in. If you weren’t an Economics major, or like me you simply failed to ever take a course in the subject, you might want to look into this book.

I think that’s all this time around, so I’ll complete things and get off to bed so I can get to work in the morning.

I'm an experienced table top gamer with an open mind to new game systems. I'm looking to explore ideas I've got. Some are pretty meta, some are pretty mundane. Welcome to my world.
View all posts by docryder »

Posted on April 4, 2017, in Personal History, Reincarnated. Bookmark the permalink. Leave a comment.

← Thursday Nights and Super Heroes
Going to Try to be Quick, But We All Know How That Goes… →